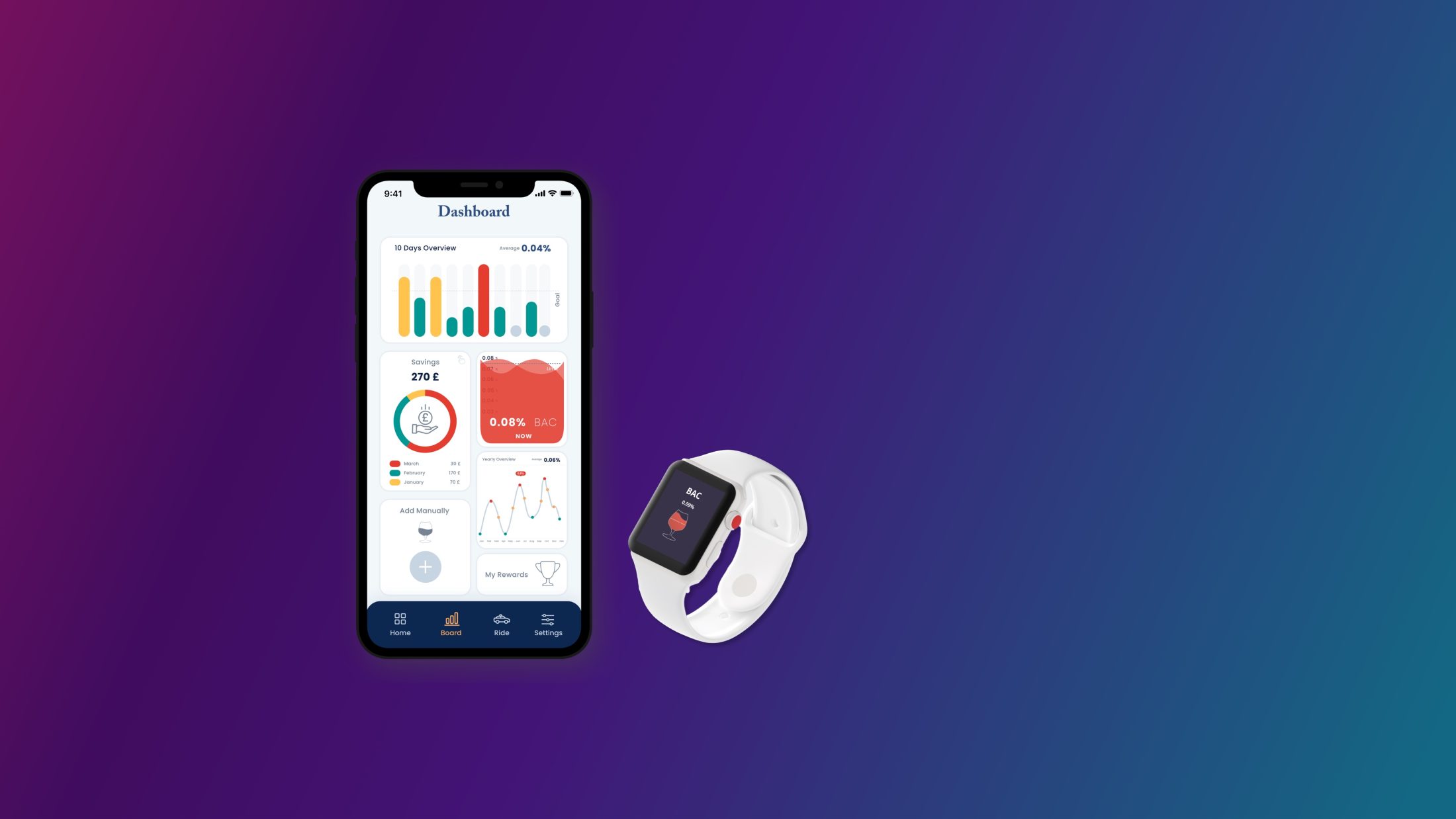 aiSober – an Application based on IoT using BioSensor & Patent Technology for Safety and Behaviour change.

This project is an individual project based on emerging technologies that are compatible with Wearable and Artificial Intelligence – Machine Learning.

The system will be combined with two main technologies; one is BioSensor which detects BAC (Blood Alcohol Concentration) alcohol through the pores of the skin by wearing a wristband. Whereas, patent technology has the ability to predict user state using machine learning and allows to detect if the user is drunk. The system determines when the user is drunk by tracking movements and comparing them to the usual pattern of movement.

The primary aim of this project is to prevent drunk people to drive a car and provide them with a ride (taxi) service. The objective is to help users change their behaviour and monitor their health by tracking alcohol consumption in the blood through the wearable. 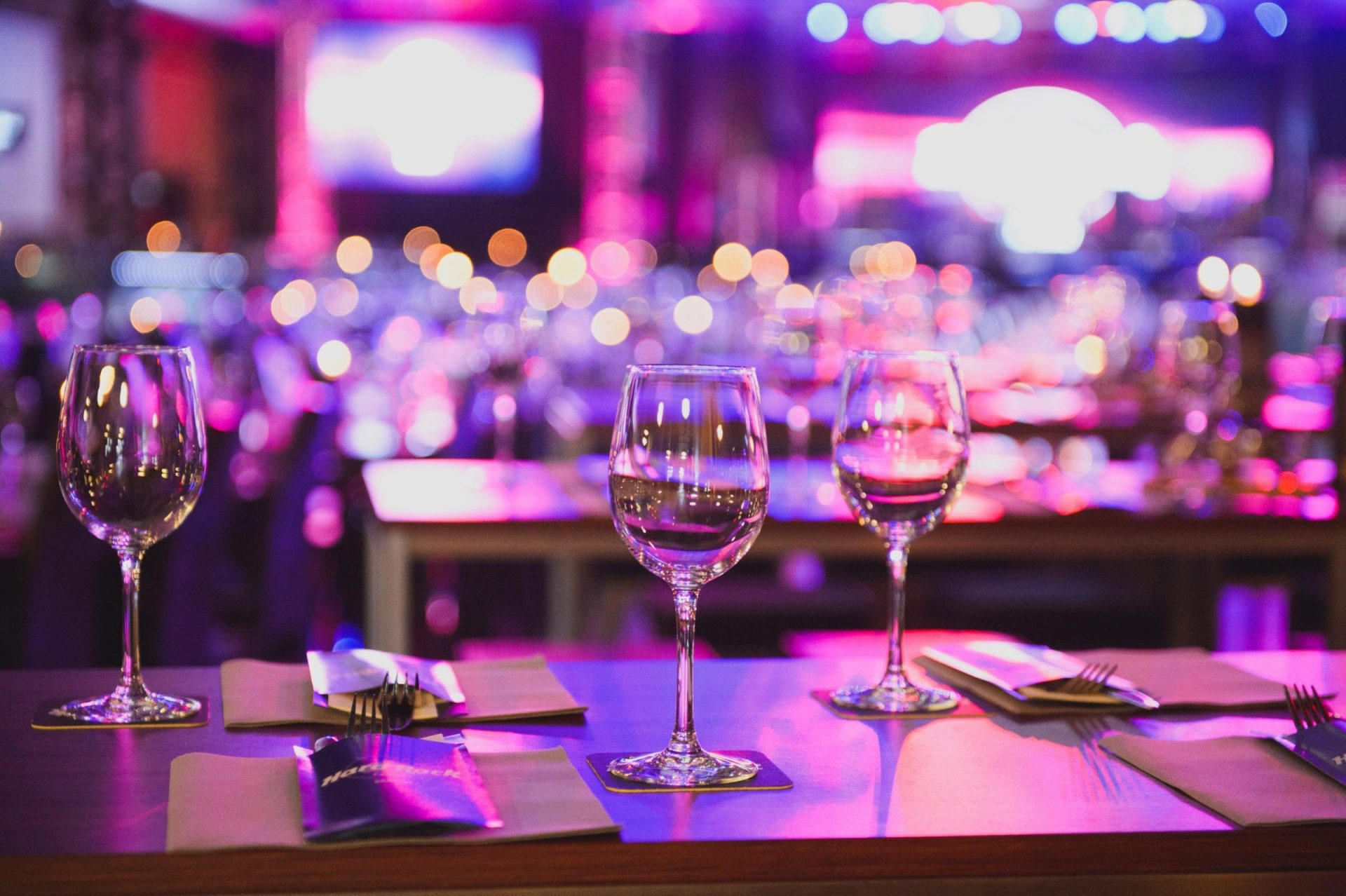 The National Union of Students has found some interesting facts after conducting a survey with students. The survey was completed by 2,2K + students which gave insights into students’ behaviour towards, attitudes to, and perceptions of alcohol use.

According to this survey, respondents most commonly reported that they drink alcohol 3 days a week and 60% say that drinking helps them to relax and socialise. 45% of respondents agreed to wake up feeling embarrassed and 41% were not able to remember what happened the night before. About 41% of respondents admitted they took risks with personal safety such as walking home alone. (Students & Alcohol National Survey, 2018)

According to surveys and studies, drinkers regretted their drinking sessions. The report also tells that people generally “overwhelmingly like getting drunk and many people could be doing so in a potentially harmful way.” (Independent, 2019)

People who drink heavily have destructive habits which will ultimately have a negative impact on their physical and mental health. Moreover, their family and friends suffer with them.

Looking at these issues objectively, it becomes obvious that many target users regret their behaviour after drinking and many of them want to change this destructive habit. 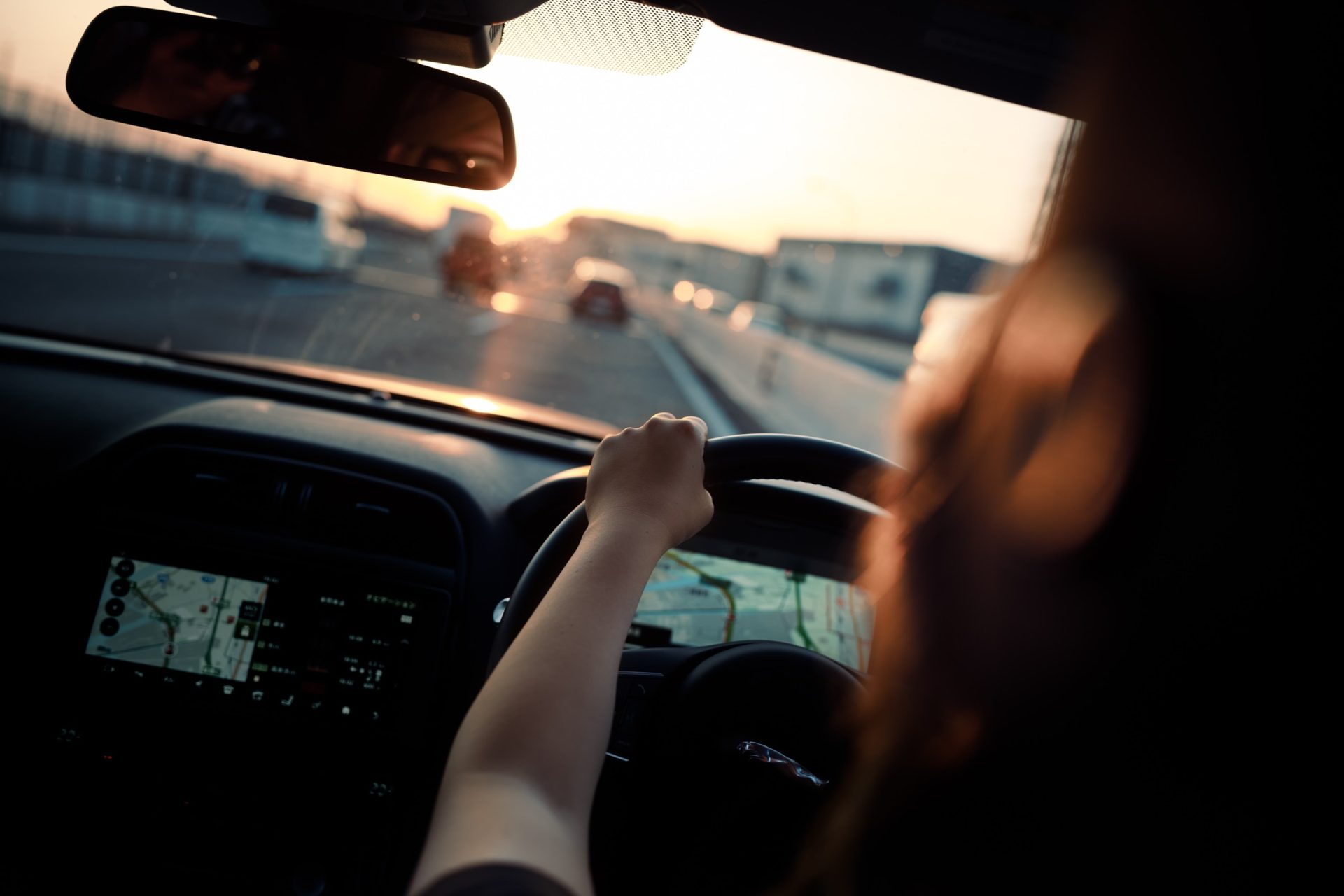 Damages Resulting from a car accident.

The most tragic and horrific thing that happens in a car accident is the wrongful death of a loved one. An unexpected death from an accident can bring shock and grief to the victim’s family and can be challenging to deal with because there is no time to prepare emotionally.

I have gone through this traumatic and horrifying experience myself, when my father and my younger brother were hit by an alcoholic driver in Germany (year 2010). My father was cut from the car and taken to a hospital, in a coma. My brother went through major surgeries. After 30 days of multiple surgeries my father passed away and my brother was left to recover from his injuries and to grieve the loss of our father.

After this horrific accident, it took a year for my brother to heal physically, but it took many more years to heal mentally for him and also for us as a family. Each day was defined by intense emotions that we all felt we could no longer control.

Since that day, I wanted work hard in order to propose a solution for this horrific issue. Although, my father cannot come back nor can the pain we went through be healed, but I hope that proposing this solution can save many other lives. 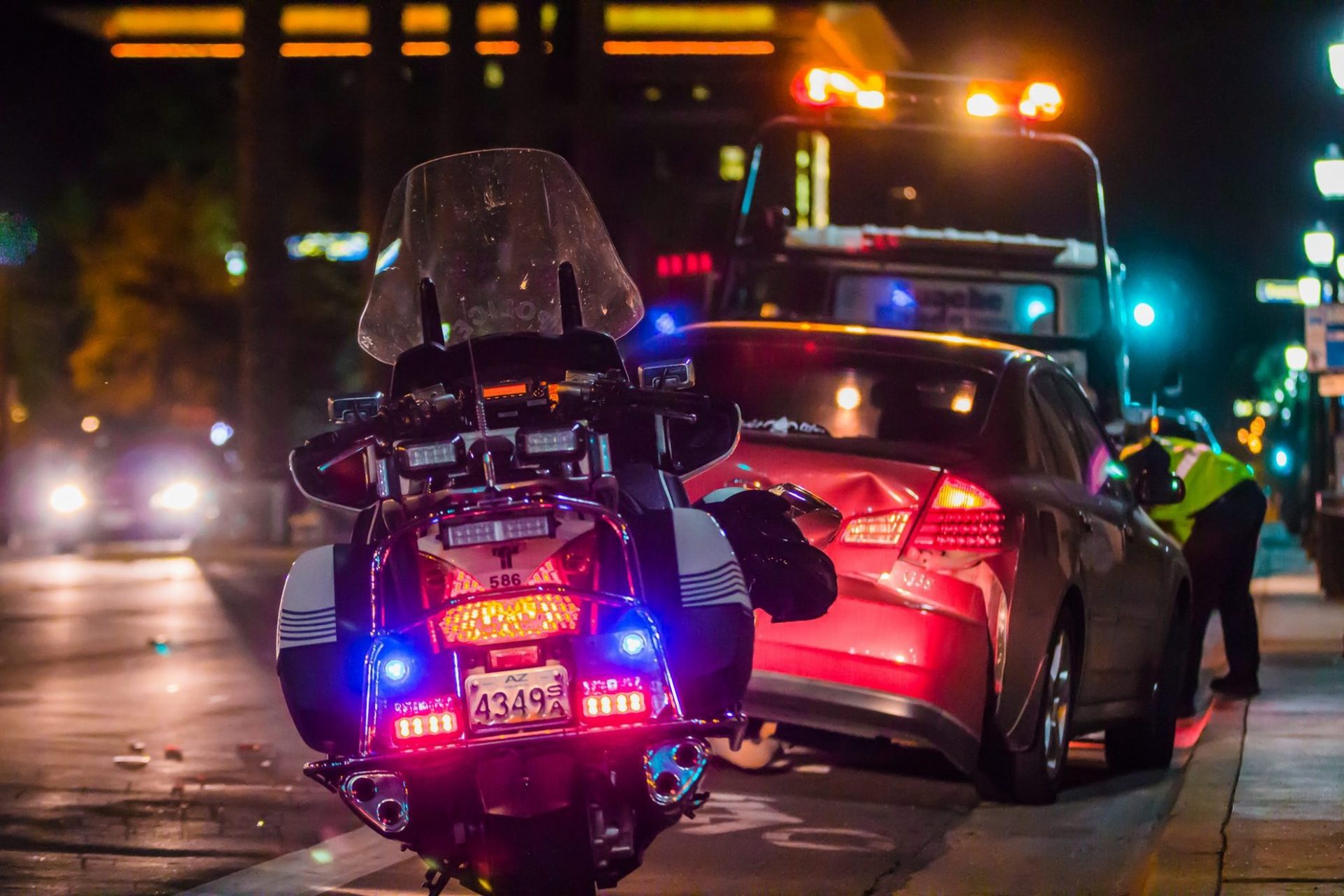 The primary aim of this project is to prevent drunk people to drive a car and provide them with a ride (taxi) service. The objective is to sense a possible danger by user’s voice and emotion estimation

The objective is to help people change their behaviour and monitor their health by tracking alcohol consumption in the blood and provide the motivation to quit drinking. 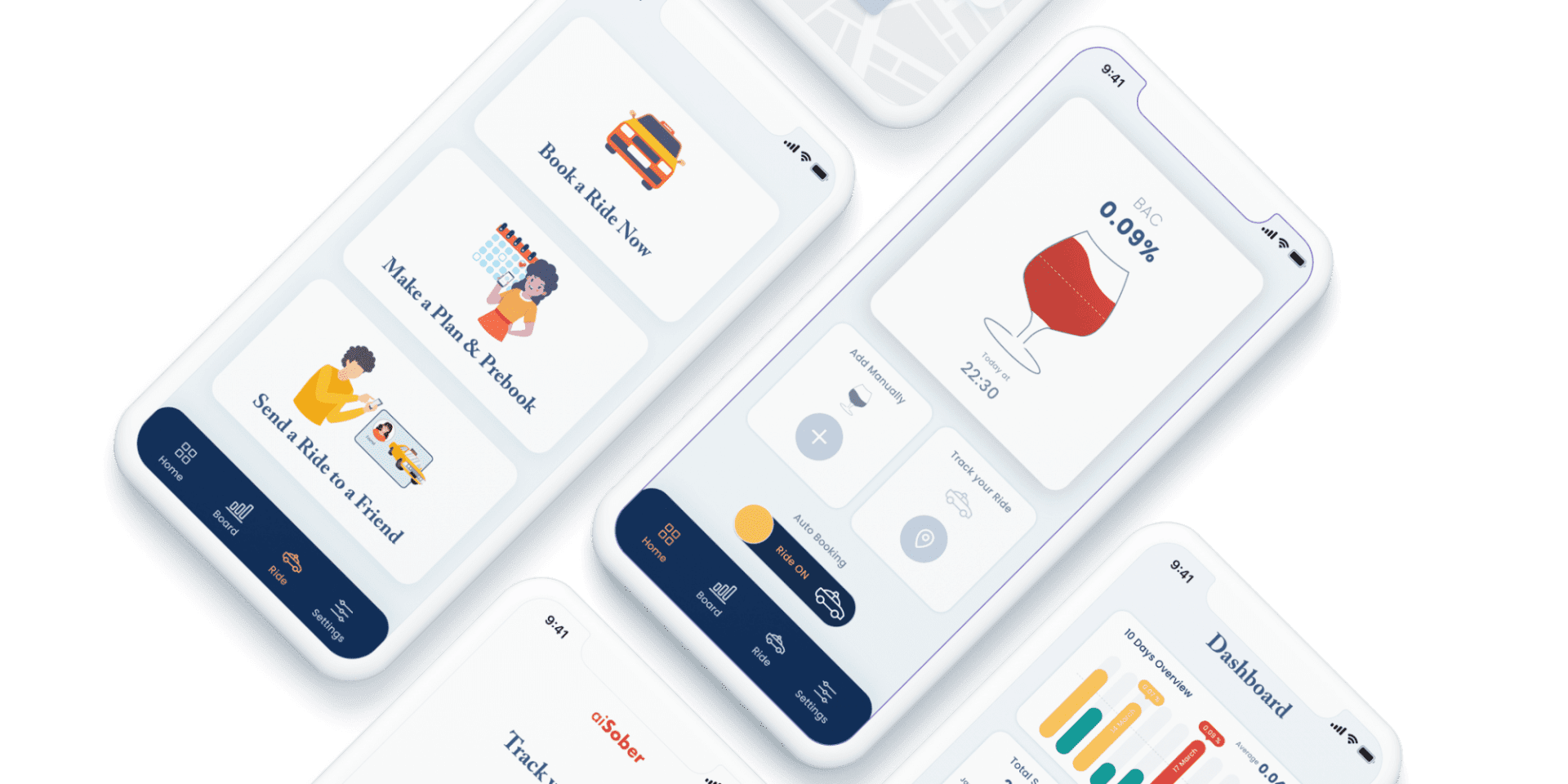 The system will use a ‘patent’ technology that predict user state using machine learning and allows to detect if the user is drunk. The system determines when user is drunk by tracking movement and comparing them to usual pattern of movement. (Search Result suggestions based on dynamic network latency classification, 2018)

A new technology which can estimate BAC (Blood Alcohol Concentration) by detecting alcohol through the pores of the skin and it has “the ability to detect alcohol that emanates from the bloodstream and diffuses through the skin.” (Wearable Enzymatic Alcohol Biosensor, 2019)

The touch-based system can read blood alcohol (BAC) through fingertips. The other solution is an air-sampling system that can test and isolate just the air exhaled by the driver. These two systems will be tested in real vehicles by DADDS. (Driver Alcohol Detection System for Safety – Technology Overview, 2020)

A technology proposed by Nissan Motor of detecting the driver’s state from the driving behaviour and using facial monitoring system with the help of mounted camera in the system (Nissan Motor Co., n.d.) can be implemented in self-driving cars. The constant monitoring behaviour of the vehicle can identify signs of inattentiveness in the driver and will decide on a course of action through the system and issue alerts of voice and message via the aiSober app. 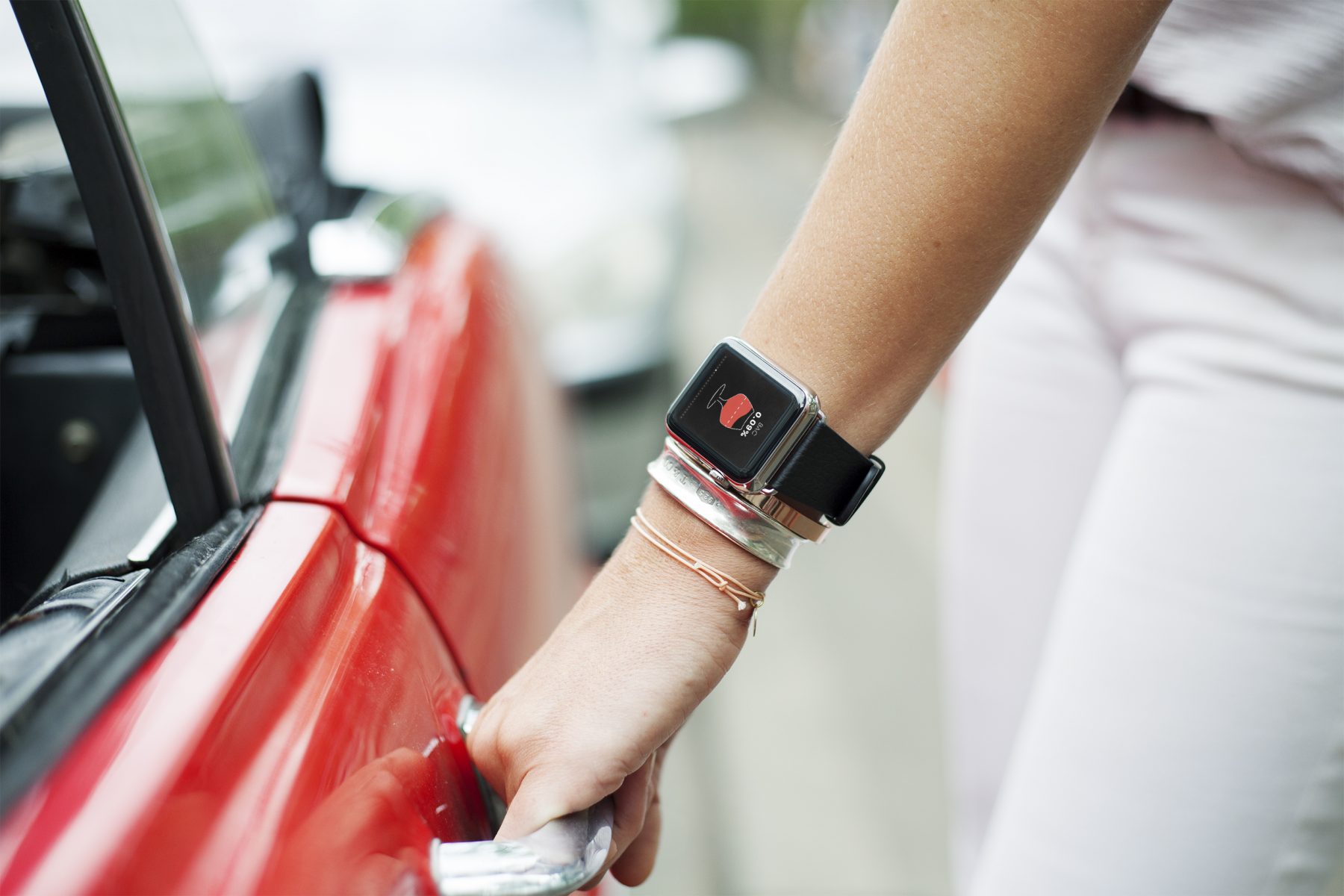 Three personas were created based on user research. The user research suggested that there are several types of users with diverse needs.  (Occupations With High Rates of Alcoholism – Addiction Center, 2015)

User flow map was created to identify problems that users encounter and the app offers solutions. 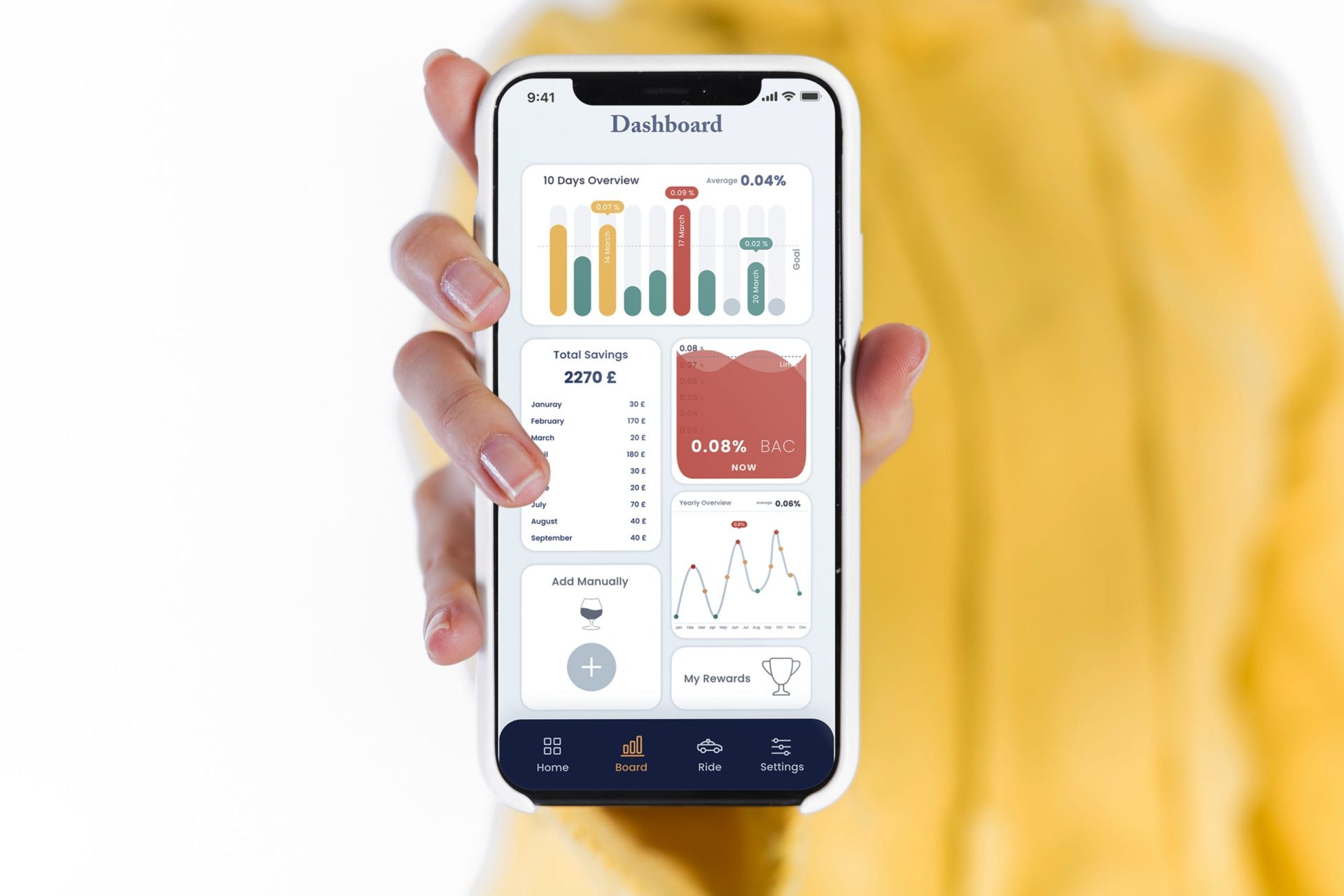 Onboarding briefly explaines main features of the app. New users will have an option to connect wearable deviced before registering with aiSober app.

The objective of two different navigation system is to identify user needs and provide them a system according to their needs. The User 1 has goal to track his BAC, get a ride service and manage pre-booking.However, the User 2 is more likely to use the app only to send a ride service to friends or track their journey for safety reasons. Therefore, after selecting main goals, the User 2 will be directed to a different navigation and features which means they see features of book a ride for friend, track their journey and get alert in an emergency.

Playback audio alerts the user by voice if the current BAC reaches over the limit. (Please refer to the screen recording video).

The Auto Ride system (toggle if enabled) will allow the user to get a ride service in case of over BAC. The ride service will be auto-booked and paid at the back end. Tracking the current location of the user is also enabled when this feature is ON. This makes it possible for the ride service to easily track the user’s current location. The objective of this feature is to make it easier for users to book a ride before they get drunk and are unable to react logically and take wise action when necessary. 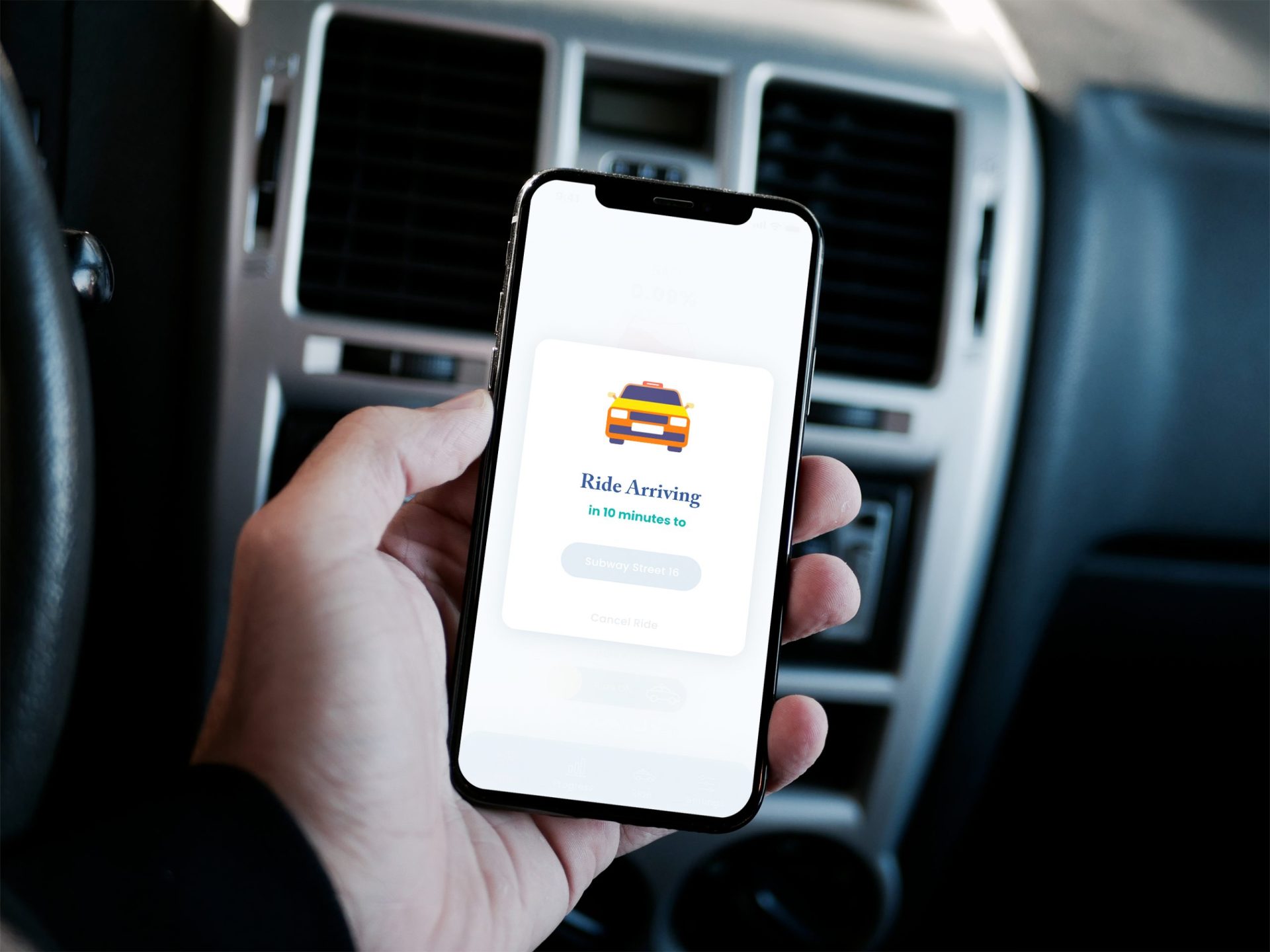 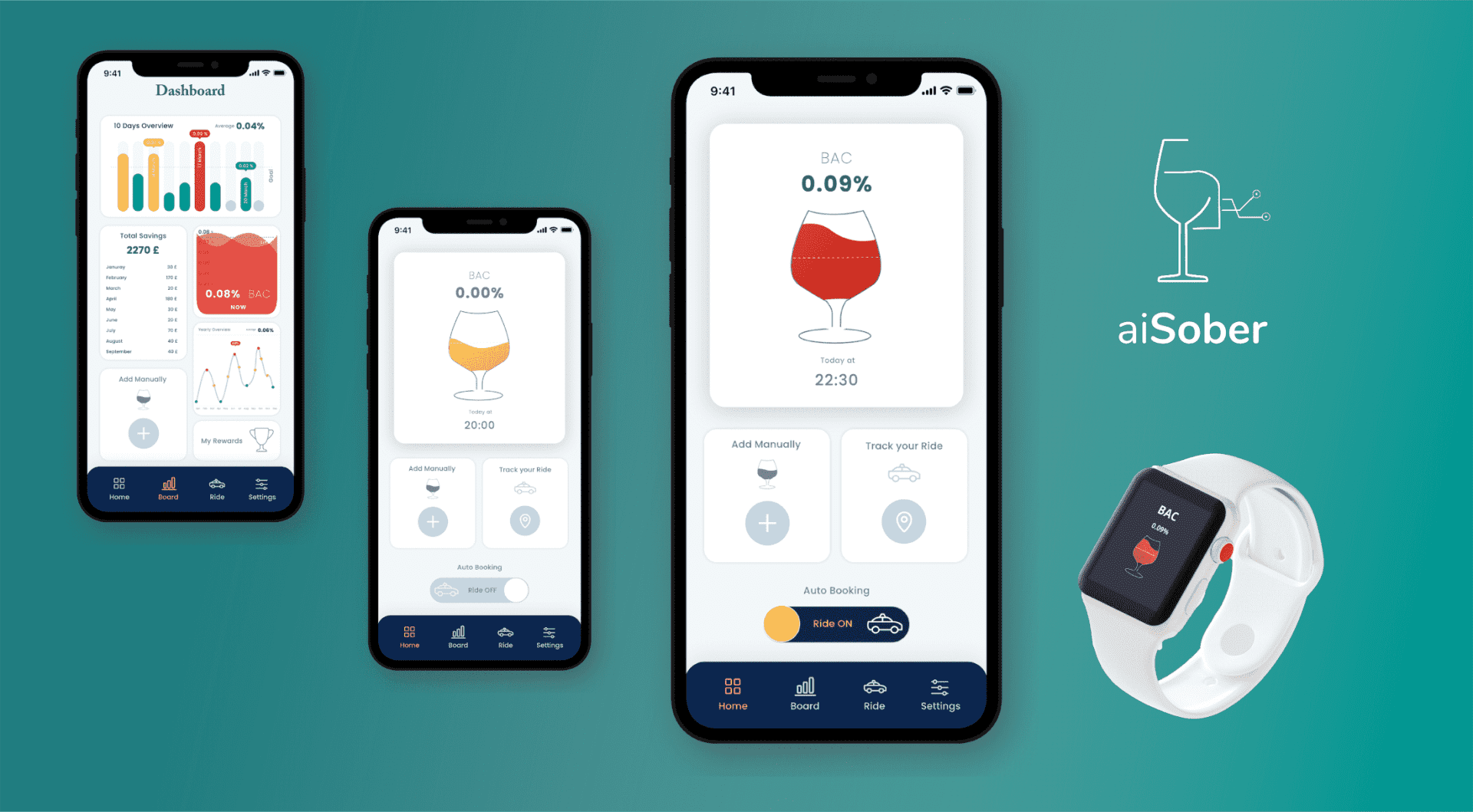 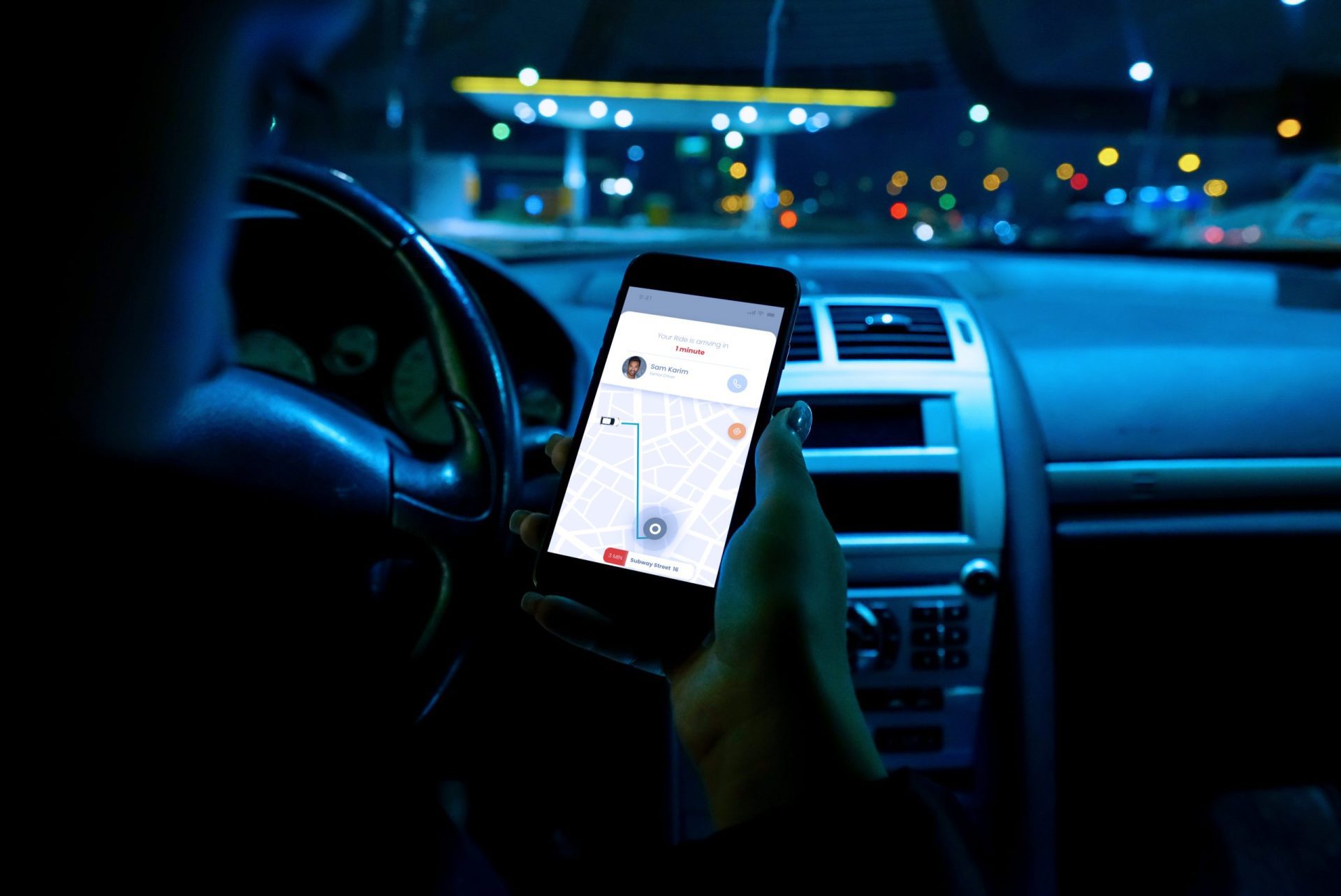 The aiSober app project mainly focused on the behaviour change and safety of users by preventing them from driving a car in drunken conditions. The outcome of this project is thoroughly researched and includes an overview of the results which has been obtained from the literature review, user‘s research, personas and storyboards and understanding of the usage of emerging technologies. Other factors that were taken into consideration were psychology, environmental pressures, and demographic issues.

The research during the study provided invaluable insights. Studies on Artificial Intelligence, particularly research on new technologies such as BioSensor and ‘Patent’ technologies have also played a crucial role in this particular project.

The idea to keep a separate navigation system for users who intend to use the app only to send a ride or help their contacts was the most difficult decision. During the development process, I went through many test versions until I obtained the most effective user experience.

Some factors which were considered in the design process include; high contrast, labels, and formatting to make the app more user-friendly and accessible to users. The user interface is designed to provide large enough spaces between interactive elements, such as buttons so that users can tap the correct element.

A pattern library which consists of a collection of reusable Interface elements was organised that will allow developers to see visual look, behaviour, and code. During the development process, the feedback received by the supervisor on the presentation was very helpful and this resulted in a decision to document the technology of a ‘self-driving car’ and its compatibility with the aiSober application.

Overall, it has been a very challenging project because of the need to analyse all of the problems and find a solution and doing so required to make of a lot of complicated decisions. It is extremely rewarding to experience and work on a viable solution for this issue. In the future, this design concept and ideas can be implemented to develop a native application that will be compatible with wearable devices.