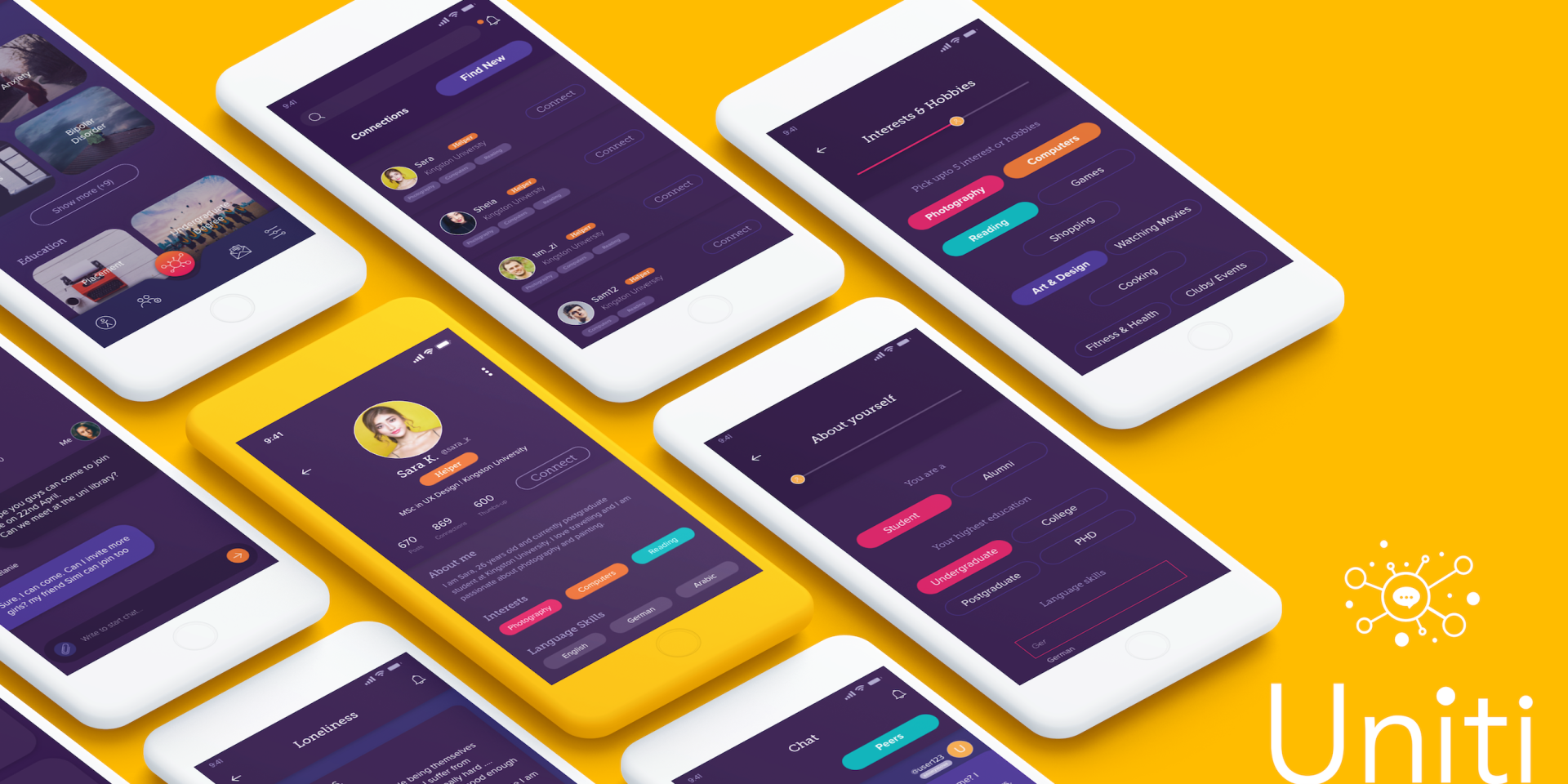 Uniti App is a project with the objective to reduce the impact of loneliness on the mental health of students.

The aim was to empathise with students and to understand their needs by doing online survey, personas and user journey maps.

The Uniti app allows students to get connected with others even before joining the university, to learn each-other beforehand.

Another design aim is a solution for isolated students to share their feelings anonymously with trained staff and peers without a feeling of being judged by others.

An online survey conducted by BBC Research found that loneliness affects young people ages 16 to 24 years the most. Another recent research by the Red Cross found that 32% of young people (between 16-24 years) in the UK reported that they had often or always felt lonely in the last two weeks. (Thersa.org, 2019)

Young people leaving home for the first time are likely to experience feelings of isolation or loneliness. While this is often temporary, it can become an issue of concern for some young people. (Knight et al. 2006; Gentleman 2009).

A recent report suggests that people who feel lonely suggest to have a better understanding and empathy for others who experience loneliness or unfairness.

The study also suggests that people who feel discriminated against are more likely to feel lonely, and the levels of loneliness are much higher “if people are made to feel that they are different in a negative way”.

The primary aim of this project was to understand the experience and emotions of young, international students and reduce the impact of loneliness on the mental health of students.

The research intention is to examine how the solution can help the affected students and create a platform for individuals who are struggling with loneliness and anxiety, even before and after joining the university and moving from origin country to the UK.

During the primary research, the aim was to empathise with students and understand their needs and concerns by doing online survey, personas, empathy map, and a journey map.

The user’s research is focused on analysing users’ personality traits and personality types. The study helped to understand what makes someone who they are. Every person has an idea of their own personality, and psychologists define personality as individual differences in the way people tend to think, feel and behave.

In order to gain empathy with the users I am designing for, the persona data was analysed through the initial user research and secondary and primary research. 3 personas (students) were identified and designed from scratch in Sketch App. Each persona has different goals, pain points and needs.

Empathy is important in understanding users holistically. These personas are characterised by only a few key attributes derived from interviews or observation. The persona designed below clearly summarises the research data. The main elements are the goals, pain points and needs. However, understanding their preferred channels is an important element for this research.

The competitor analysis is collected from online research and bespoke UX method from the user research outcomes. Users’ reviews were obtained from the App store ratings.

The Student Room (TSR) app is a forum-based website and an app for iOS and Android users which allows users to post in a thread. Although the app has a feature of sending instant messages, a live chat feature is missing. The app has a poor user interface, and searching a keyword does not work properly.

User’s Feedback: “I have found that trying to submit posts or finish editing posts the button becomes stuck and you have to switch apps to perform another action

The Umii App is a social networking app for university students. The app connects “like-minded students via personality traits”, who can then meet at their university. However, the app only shows the matched of students from the same university and allows syncing a new match result after at least 48 hours.

User’s Feedback: “This is a great idea with a really good interface and will be even better when more people join and interact on the app!!”

Wisdo app is a social networking app for anyone who has a unique story to share. Users can register and discuss their personal problems and sensitive issues. The Wisdo community aims to help others by sharing and discussing problems. However, the app is not moderated by any trained member, and bad advice provided to vulnerable people can harm them badly.

User’s Feedback: ““Please steer clear of this app I wanted to try it thinking I could speak to people that might know the pain I am going through but it has made it worse. It is just an unmoderated forum where people write all sorts of horrible things. There was someone with an obscene name, considered offensive in most of the world.””

The empathy map was created to gain a deeper insight into the student’s thinking, feelings, worries, and aspirations.

This journey map represents a timeline of an introverted student’s actions and visualising the details of all of the touch-points she comes into contact with while attempting to achieve a goal, as well as the emotions she experienced during that journey. The journey starts in China, when the student received her admission letter from the university, and the journey ends after she attends her first class.

Flow charts are useful and simple ways of mapping out the possibilities that may involve an app’s full experience. The User Task flow shown below reflects the four aims of this project.

The first aim is to allow users to join groups before accepting the admission offer. The second aim is for verified students to get connected with their personality-matched peers. The third aim is access to the helpline with trained staff and supportive peers. The helpline feature also allows users to chat anonymously. The fourth aim is to implement ‘gamification’ – a reward technique to enhance user engagement with the app.

The most basic paper prototype sketches were designed for each screen . In a demonstration or usability test, the sketches are switched according to user actions. One of the advantages of paper prototype is that I could create multiple versions without wasting time on digital tools.

The initial low-fidelity wireframes were designed in Sketch. However, after some research and reading reviews by UX practitioners, I decided to switch to Adobe XD. According to reviews, Adobe XD has recently improved its stability and performance. Adobe XD has also recently added a new feature called ‘Auto-Animate’, which enables designers to easily create prototypes with animated transitions.

The user interface was further improved to make it more realistic, appealing, and functional. The interface was modified with some additional features, based on testing and experimenting.

I took the opportunity to inspect my design elements in this great collaboration tool for UI designers and front end developers. It allows for uploading wireframes or visual designs from Sketch or Adobe XD to add to a project folder in Zeplin. The annotations are automatically added to the designs, such as size of elements, colours, margins, and CSS suggestions for certain elements, which is very helpful for an online repository.

The Uniti app project focuses on the mental health and well-being of students. It has been a very challenging project that required many detailed decisions. The outcomes are researched and include an overview of the results which has been obtained from surveys, personas, empathy map and user journey maps.

Other factors considered include psychology, environmental pressures, demographic issues, and many other contributing factors. When looking at these issues objectively, it becomes clear why human mental health is impacted so negatively. It also becomes possible to understand and empathise with the reasons why international students struggle physically and emotionally while moving to a new place.

It has been a very challenging project to analyse all of the problems and to find a suitable solution. Literature review also has played an important role in this project.

The research conducted during the study provided an invaluable insight. During the define process a constructive feedback was also received from a UX professional, which gave an understanding of how knowing the target users in a deeper level can help to use psychology in design and to get users engage in behaviours they actually consider.

The main contribution made in this particular project is the visual approach in presenting the user experience content. Throughout the development process, consistent visual elements were created to make sure UI elements are consistent throughout the app.

The content, UI elements, fonts, backgrounds, and colours are designed in consistency. The branding and style guide was followed by every design decision. User Interface elements that are commonly used and that are consistent and widely understood by users were considered for this project.

The design process of this project was an innovative solution with a user-friendly, minimal interface, in order to ensure broad appeal to the target users. The final prototype has been developed by refining multiple design solutions and then testing the app multiple times.

Throughout the process, many new technical skills were learned. It is extremely rewarding to know that a viable solution for the problems of the target users is discovered. However, I feel that, if I had more time and resources, I could have asked technical advice and also tested the usability of the prototype with potential users.

While informal interviews were concluded during the research phase – gathering more data as the “User diary” – have not been investigated due to time and resource constraints.

In the future, the design concept and these ideas can be applied to improve the user experience and also to develop the native app for iOS and Android platforms. 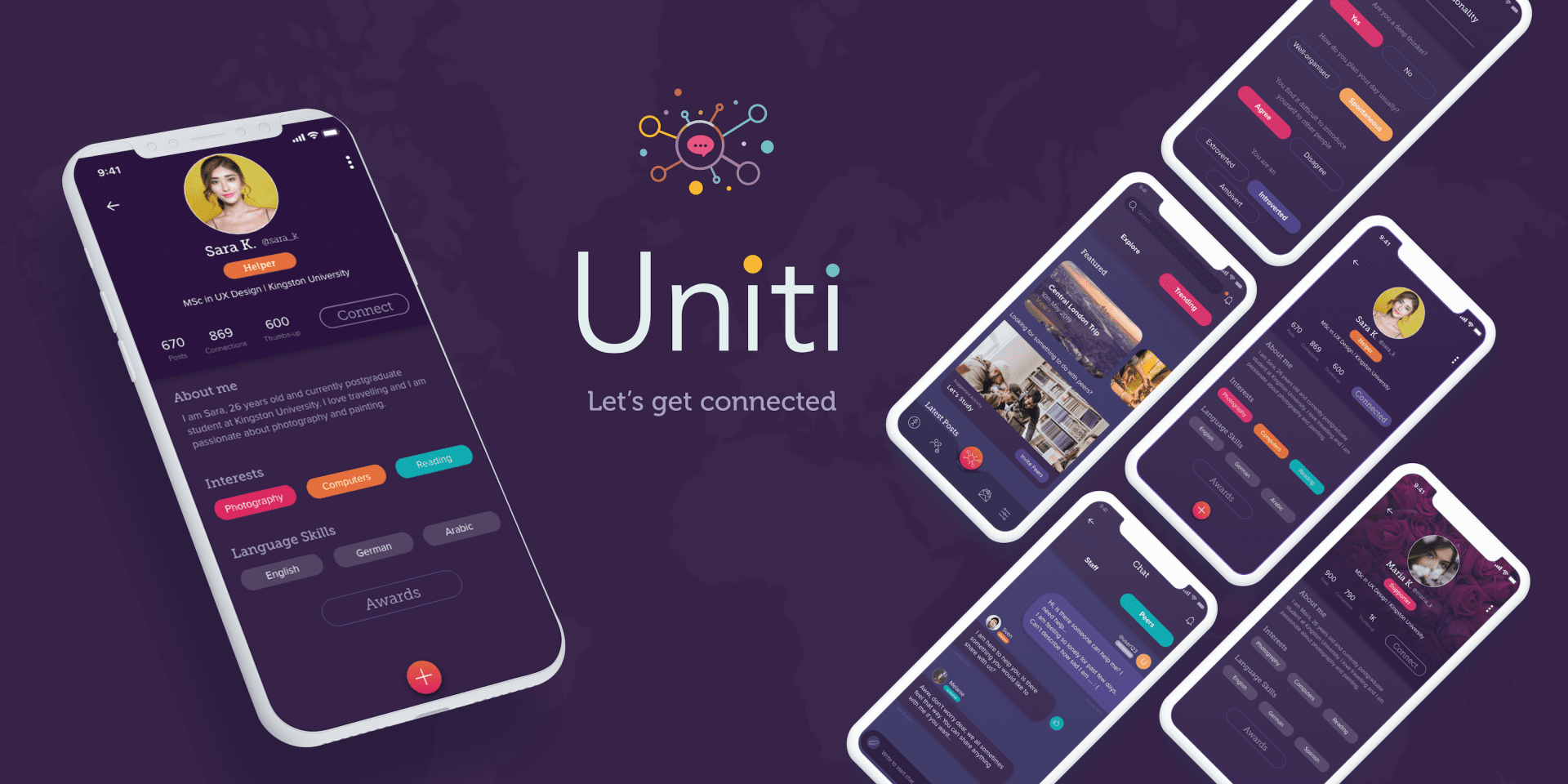